Here’s something for Thanksgiving: More birds! Now it’s Quackers, a new CGI animated film on its way from Russia’s Rome Animation and Film Studio. (Rome or not, it’s from Russia.) “A conflict flares up between local Mandarin Ducks and the Military Mallards who land on the Chinese island, mistaking it for Hawaii. While the fathers fight and argue, Longway, the Emperor’s son, and Erica, the commander’s daughter, meet and become friends. The kids must ally all the ducks to battle their foe, the daunting Ms. Knout, who seeks to destroy the Sun.” Got all that? Directed by Viktor Lakisov and due in 2016, Quackers has its own official web site, as well as a preview video up on Vimeo. 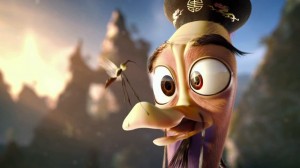