flayrah
furry food for thought
furry
conventions
fursuits
media
movies
eccentric
opinion
sci-fi
art
television
animals
comics
science
animation
websites
novels
Featured: 'Fuga: Melodies of Steel' - A game that tanks, but in a good way - Did you ever want to play a game with animal people in a World War 2…

Help for the Creator of Rocket Raccoon

With all of the attention that Rocket Raccoon and his fellow Guardians of the Galaxy have been getting, some attention has also begun to shine on a nearly forgotten name: Bill Mantlo. Back in 1976, Bill teamed up with Keith Giffen to introduce the original Rocket Raccoon in the pages of Marvel Preview #7. Not long after Rocket would team up with the Incredible Hulk, of all things, before moving on to his own comic book miniseries. In 1992, Bill Mantlo was struck by a car while he was out roller-blading, and he remained in a coma for many years after the accident. He has since regained consciousness, but he suffered brain damage from the accident and now requires full-time medical attention. Many Marvel fans and comic book professionals are urging Marvel (and Disney, Marvel’s parent company now) to contribute part of the likely sky-high profits from the upcoming Guardians of the Galaxy movie towards Bill’s medical needs. Comic book writer Greg Pak has a web-site devoted to the cause of raising money for Bill’s care. Meanwhile, if you haven’t seen it: Marvel has released a new mini-preview of Guardians that includes a bit of Rocket’s voice, Bradley Cooper. It’s interesting to hear the film’s director James Gunn describe Rocket as “the heart of the movie in a lot of ways”. 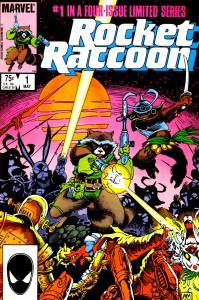