'Beyond the Edge of Owlsgard' has been released, reviewed

WatchDaToast has been developing a furry-themed point-and-click adventure game for a while now, Beyond the Edge of Owlsgard, raising €36,317 from 682 backers on Kickstarter. It's just been released, and VoxelSmash has reviewed it.

They've been gone for quite a while: 'Guardians of the Galaxy Volume 3'

Since the last Guardians of the Galaxy movie, Volume 2, a lot has happened, both in the universe of the story, and behind the scenes. In universe, every member of the team except Rocket was "snapped" out of existence, which is okay for furries, since Rocket was the only actual furry member of the team, and they mostly all got better, anyway. In the real world, meanwhile, series director James Gunn was fired from this third world, but he also got better. Anyway, the third movie will finally come out next year, and a trailer has been released.

From a furry perspective, it doesn't get much better than this. Rocket's origins are being explored, the villain is the High Evolutionary whose whole thing is literally making furries, Cosmo will continue to appear after The Guardians of the Galaxy Holiday Special on Disney+, and, oh yeah, that's Lylla the otter.

Exciting news from the world of streaming. “DreamWorks Animation has shared a teaser trailer for the all-new CG animated series Dragons: The Nine Realms. Inspired by the hugely popular How to Train Your Dragon movie franchise, the show premieres on Hulu and Peacock December 23. Set 1,300 years after the events of How to Train Your Dragon, dragons are now just a legend to the modern world. When a geological anomaly opens an immense, miles-deep fissure in the Earth’s surface, scientists from all over the world gather at a new research facility to study the mysterious phenomenon. Soon a group of misfit kids, brought to the site by their parents, uncover the truth about dragons and where they’ve been hiding — a secret they must keep to themselves to protect what they’ve discovered.” Find out more and see the teaser trailer over at AWN. 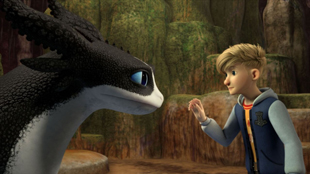 Trailer: 'Raya and the Last Dragon'

Disney has posted a trailer (now two) for its next animated movie, Raya and the Last Dragon, which will have a release date of March 5, making it officially Walt Disney Animation Studio's first movie of this exciting new decade. It has a talking Eastern-style dragon in it, so that's furry.

Raya and the Last Dragon will release theatrically, but as actually going to movie theaters is still not really recommended at this point, it'll also be released on the Disney+ streaming service the same day, though with an additional "Premier Access" charge of $29.99 in the US.

The movie features Kelly Marie Tran as the titular Raya, with Awkwafina as the titular last dragon (meanwhile, Disney animation regular voice actor Alan Tudyk will once again be "voicing" a non-anthropomorphic animal; this time, the giant pillbug / armadillo creature Tuk Tuk). The movie is set in the fictional fantasy world of Kumandra.

Animation World Network let us know about Love Monster, a new animated series for the young set that’s coming soon to HBO Max. It’s based on a series of picture books by Rachel Bright. “Love Monster follows the colorful and funny exploits of one-of-a-kind, huggable hero Love Monster as he navigates the challenges involved in being a bit funny looking in a world of cute fluffy things. Every day provides Love Monster the opportunity to embark on all kinds of big adventures with his friends in Fluffytown, where, together, they learn all kinds of little life lessons. Full of heart and helping preschoolers understand and manage different emotions, Love Monster showcases the importance of kindness, empathy, connection, and instinct.” The AWN article includes an official trailer. 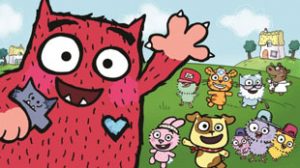 Just two months after the live action Sonic the Hedgehog movie's character design caused such a backlash that the movie was delayed to 2020 to fix it and on the very day the controversial "live action" Lion King hits theaters, we have yet another entry in 2019's "was 'live action' really a good idea here?" canon. The trailer for Cats is out now, and to quote the villain of the aforementioned Lion King (which is also a Boy Scout motto), "Be prepared."

Fun fact: no movie directly adapted from a video game has ever scored as "fresh" on the review aggregate site Rotten Tomatoes. Oh, there have been movies about video games that have reached the "fresh" side of the Tomato-meter. And we may have a soft place in our heart for, say, the oeuvre of Paul W.S. Anderson, but most of us will admit 46% for Mortal Kombat is probably fair, if a bit harsh. The point is, unless Detective Pikachu somehow lives up to the surprisingly positive amount of hype it's gotten, there may not be a "fresh" video game adaptation for a while yet.

But, a new challenger approaches! Starring James Marsden and Jim Carrey (as Dr. Robotnik), Sonic the Hedgehog, an adaptation of the classic series of Sega games, will hit theaters November 8 of this year. The newly released trailer is below.

Update 5/2: The director of the movie has Tweeted that the design for the titular character will, in fact, be changed before the final movie is released. Also, while we're here, quick correction; 2018's Rampage did garner a score of 52% on RottenTomatoes, and the article has been edited to more accurately reflect this. This has also caused the movie to be delayed until February 14, 2020.
Update 11/12: New trailer with new design has dropped.

On December 22, 2018, Netflix and BBC One will see the second animated adaptation of the 1972 Richard Adams novel Watership Down. This time, it's a four-part miniseries of one-hour episodes.

Unlike the 1978 animated film's trailer, which focused on the story as a philosophical, epic fantasy, this new trailer has more the feel of a modern action drama.

Detective Pikachu will be hitting theaters May 10 of next year. Hopefully, Pikachu talking goes down a little better with the fans this time.

A pair of trailers came out within hours of each other last week for future furry features; Wes Anderson's Isle of Dogs, a stop-motion animated movie featuring talking dogs, and Peter Rabbit, a live action movie featuring CGI animals who wear clothes in addition to talking.

The Syfy (formerly Scifi) channel will be airing Happy! beginning Dec. 6. The show will be adapting Grant Morrison's 2012 comic of the same name, and will feature Patton Oswalt as the voice of the titular role, a possibly real, possibly imaginary (comic readers familiar with Morrison's work will note these are not entirely contradictory descriptors for him) flying blue unicorn who can only be seen by a washed up hitman. A short teaser trailer, giving a small glimpse of Happy, has been made available.

GKIDS to release 'The Big Bad Fox' in America

GKIDS, an American distributor of foreign animated films, has gained release rights for The Big Bad Fox & Other Tales. The film is co-directed by Benjamin Renner and Patrick Imbert, based on a graphic novel created by Renner. The movie does not yet have an English language trailer, but a French trailer with English subtitles has been released.

The movie tells three different connected stories; the titular story features a fox who tries to raise chickens in order to eat them, while other stories include a rabbit trying to deliver a baby, stork-style, and various animals playing Santa Clause. GKIDS has traditionally created an English language version of the movies they distribute, though no announcements of possible English voice actors have been made (or even planned at this early stage).

The classic Nickelodeon slice-of-life cartoon of a wallaby and his friends returns in 2018 to Nickelodeon with an animated movie. This trailer debuted at the San Diego Comic-Con, and promises to bring the characters from the 1990s into the more modern modern era.

On May 16, a trailer for the upcoming Sonic Forces revealed a surprising direction for the hedgehog’s latest 3D venture. The new character that will be joining the blue blur in his adventure would not be just another Sonic Team-crafted sidekick. Instead, it will be a character you yourself develop that will team up to take down the meddling Eggman.

That’s right, the infamous Sonic "Original Character" is now canon. But how much can you customize to bring your dream character to life? Let's take a look at what's known so far.

All of the information is in this Cartoon Brew article, so just read it there.

If there is a difference between anthro fans and furry fans, this movie may make it clearer. The monsters in Monster Trucks aren’t furry at all.