Down On Jollity Farm

Hadn’t heard about this, ’till Animation World Network let us know: “Apple TV+ has released a trailer for the new live-action / CG animated hybrid kids and family series Lovely Little Farm from Darrall Macqueen, the London-based BAFTA Award-winning producer of hit series Topsy & Tim and Teletubbies. The show premieres globally on June 10. The series follows sisters Jill and Jacky as they love and nurture all the animals on their farm nestled in lavender fields. Being a young farmer isn’t easy, but every day brings these sisters adventure and a chance to grow. ILM provides the show’s CG animation that brings the series to life.” There is actually quite a bit of CGI and puppetry involved in this show, as it seems that the young ladies have the ability to speak to the non-human animals on the farm. Take a look at the trailer to see what we mean. 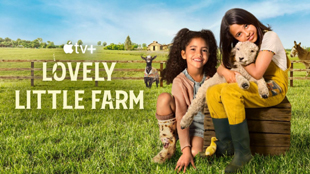 The Puppetry Institute of Santa Cruz is the impressive name of a California facility that believe in “…giving all who walk through the doors a chance to experience first hand the beauty and wonder of an art form that encompasses all the other arts into one.” No prizes for guessing: They’re located in Santa Cruz, at the Capitola Mall, “Just around the corner from the Santa Cruz Museum of Discovery”.  But they also get out and about to various conventions and fannish events — we found them at BLFC! According to their web site, they give adults, kids, and families a chance to “Explore puppetry through workshops, classes, and demonstrations. Puppetry is more then just a sock with googly eyes — it’s design, construction, movement, masks, sewing — the list goes on. We offer a wide variety of classes in puppetry, theater, and FX skills, that cannot only be counted as art credits but also math, science, and engineering. We have 1000 sq ft space where students can learn in a lively and creative environment; or, we can do 1 and 2 hr pop-up classes at a location of your choosing.” The sight includes a lot of photos of their projects past and present. (Be sure to ask them about the “Dragon Petting Zoo”!)

The Funday Pawpet Show, a weekly staple of furry fandom, announced on September 12 that it will be ending its weekly broadcast, citing legal and logistical woes, particularly regarding the music industry.

We have come to a cross roads. Streaming video and music copyrights and licensing have become such a tangled mess of pain in the butt. The music industry has made it impossible for the little guy to do anything online. The costs, the bookkeeping, the constant upkeep of trying to keep from getting flagged… It is no longer a labor of love. We thank you all for nearly 18 years of puppet broadcasting support.

The loss of furry-friendly streaming service Furstre.am weighed on their decision. According to site creator Jacktail, the domain name was allowed to expire this month, as no current developers wished to take it on.

Down at Fraggle Rock — Again

Word has been spreading fast among the Silly Creatures that the long-rumored big screen version of Jim Henson’s cult TV series Fraggle Rock is finally a go. Joseph Gordon-Levitt (Inception) is set to produce and star in the feature film version. (Interesting side note: Mr. Gordon-Levitt was the voice of Jim Hawkins in the Disney animated film Treasure Planet.) Here what we got from The Nerdist:

Originally an HBO series which ran from 1983-1987, Fraggle Rock centered around a group of tiny creatures called Fraggles, along with the even smaller Doozers who lived among them. The Fraggles and the Doozers lived in a series of caves called Fraggle Rock, and would only venture outside of it to gather radishes to eat, where they would have to avoid the giant Gorgs.

That and get advice from a matronly trash heap named Marjory, and occasionally interact with the human (and his dog) who lives above them all. Trust us, none of this even begins to capture the magic that went into making this show and the magic that viewers took away from it. This new live-action feature film version is being created by the Jim Henson Company and released by New Regency.  (Hmm, not by Disney, eh?) No word yet on a targeted released date, but you can bet you’ll be hearing more about it soon.

Review: It’s the Muppets again in 'Muppets Most Wanted' The latest Muppet movie begins at the end. Not like in media res, I mean like the first thing you see in this movie are the giant words “THE END.” We’re back at the end of the last Muppet movie, and it slowly dawns on the Muppets that the cameras are still rolling. This could mean only one thing!
Obviously, James Bobin forgot to shout cut.

No, wait, the Muppets are doing a sequel! So, the movie begins with a meta moment when the Muppets realize they’re now in a sequel, and they sing an absolutely hilarious song about this fact entitled “We’re Doing a Sequel.” So now they’re puppets, who are actors, who are playing themselves in a movie. It’s kind of like This is The End, except I don’t think James Franco is a puppet. At least I’m pretty sure he’s not.

Anyway, the best part? This movie was going to be called The Muppets Again! Because it’s about the Muppets, again! It’s so absurdly stupid it’s kind of brilliant, which is why it was changed at the last moment to Muppets Most Wanted. They went with a more descriptive, less generic title that somehow managed to be less descriptive and more generic.

Good, now explain it to me.

Taking a cue from the life and work of Jim Henson (who else?), Gordon Smuder and his associates formed The Puppet Forge back in 2001 to make and perform with puppets for a variety television and other media projects. Since then they’ve appeared in commercials for the Minnesota State Lottery, The Choo Choo Bob Show, Transylvania Television, John Kovalic’s The Dork Tower Project, and many other places. They also travel the land to various fandom conventions to sell puppets and teach about puppetry. Their web site has much more — and a plethora of pictures. Like this one… 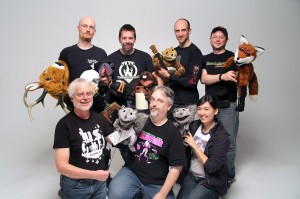 Looks like we have an addendum to the addendum; but since this movie comes out next week (and our own beloved editor is apparently clueless about its existence), now is a good time to share the trailer for Muppets Most Wanted.

Muppets Most Wanted stars (besides the Muppets, obviously) Tina Fey, Ricky Gervais and Ty Burrell and is directed by James Bobin. It hits American theaters on March 21.

Animation: The 'Clangers' are returning

From 1969 to 1972, BBC-TV presented a series of 26 10-minute stop-motion animated children’s episodes about the Clangers, tiny pink mouse-like denizens of another planet, and their cook, the Soup Dragon. The series was popular with British children and parents alike.

The Cartoon Brew has announced, in an article by Neil Emmett, that Clangers (or The Clangers) will make a comeback in 2015, with 52 new episodes for CBeebies in Britain and the preschool channel Sprout in the U.S. The new series will be produced in stop-motion animation of knitted puppets by Peter Firmin, the original puppet maker and puppeteer (now 84), with writing supervision by Daniel Postgate, the son of the creator and original writer, Oliver Postgate. The article contains one of the original 10-minute episodes.

Walt Disney Pictures have announced several upcoming feature films, and among them is the sequel to the successful 2011 re-launch of The Muppets. Currently titled The Muppets… Again, the new film is scheduled for release in March of 2014. According to The Muppet Wiki, “The film is planned to be a ‘comedy caper’ set in Europe.  Ricky Gervais will star as ‘a male lead whose intentions are always in question’ along with Ty Burrell as an Interpol inspector, Tina Fey as a ‘Russian femme fatale,’ and a ‘slew of cameos’”. [Oh like they ever have that in a Muppet movie!] The sequel will be again directed by James Bobin, and scripted by Nick Stoller, who co-wrote the 2011 film with star Jason Segel. 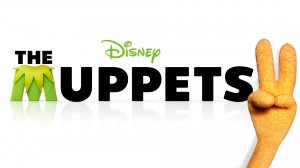 Born in 1984 as an underground comics parody of various martial arts and mutant comic books, the reptilian superhero team known as the Teenage Mutant Ninja Turtles turned 28 last May, making them a bit old to still be considered teenagers.

Word is out around Hollywood that 80′s favorite ALF will be coming to the big screen finally. In case you need a refresher: “ALF stands for Alien Life Form, and the ’80s sitcom centered on a friendly furry alien creature (a puppet) who crash landed on Earth and took up with the Tanners, a suburban family. ALF, whose name was later revealed as Gordon Shumway, is sarcastic and has an appetite for cats. He courts trouble with government forces that are on his tail.” According to the article in Hollywood Reporter (and elsewhere), Jordan Kerner — who produced last year’s hit movie The Smurfs — was pegged by Sony Pictures to produce the new picture. Again, it will be a live-action feature film with ALF himself as a CGI character. Tom Patchett and Paul Fusco, creators of the original TV series,  will be involved as co-producers. Paul Fusco was also ALF’s main puppeteer and voice actor, and he’s expected to be the character voice for the new film as well. So far there’s no word as to a main script writer, a director, or a planned release date… but watch your cats just in case. 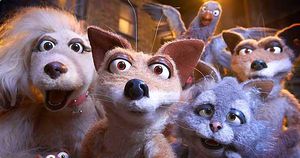 British comedy puppet series Mongrels has been axed by its television station, BBC3.

The series, described as "Avenue Q meets Family Guy", centred on a troupe of five anthropomorphic animals who hung around the back of a pub on the Isle of Dogs in London.

Review: ‘The Muppets’ is the best puppet movie of 2011

I learned this lesson from the Muppets; perhaps my fondest movie theater experience is having an entire theater alone with just my family watching The Muppet Christmas Carol. It's probably neither the studio’s nor the theater owner’s favorite way for you to watch a movie on the big screen, but if you find yourself laughing out loud alone in the dark, you know that it is really you laughing.

Sadly for the Muppets, but happily for me, I had the theater all to myself for The Muppets. I found myself laughing in the dark once more. The original Hugh T. Manatee, a regular member of the Funday PawPet Show cast, is up for auction.

Funds will be used to purchase new equipment for Poinkcast, HughTube and video archive digitization.

A few weeks ago, I started thinking, I'd love to have a YouTube channel focusing on stuff I've done and Hugh and Poink; [...] So, I created HughTube. [...] I decided I really wanted to build this up, film stuff with Poink and Hugh that hasn't been seen anywhere, and really build up the PoinkCast brand. I put together a list of stuff I'd need, and realized that if I did it all out of pocket it was going to take a while. So I posted it on FA and asked for donations.