Tales of the Tai-Pan Universe #51, a furry science-fiction shared-universe fanzine that was announced in July 2015 as coming soon is finally here. It came out in July 2016, and is a double issue: #51 & #52. With a glossy cover and square binding, it feels more like a book than a fanzine.

As editor Gene Breshears describes it,

We're calling it a double issue, but at 162 pages and with 20 stories, issue 51-52 contains more than four ordinary issues' worth of tales!

It's available for $15 from Rabbit Valley, or from the Tai-Pan Literary and Arts Project. Back issues can be ordered, too - again from Rabbit Valley and also from Second Ed, at a discount. But the news isn't all good... 'Rowrbrazzle' has a new Official Editor William Earl Haskell in Houston, TX, who has been Rowrbrazzle’s Official Editor since 2007, is stepping down because of worsening health. He will continue to be an ordinary member, but the Official Editor’s office and duties are being transferred to Edd Vick at 1505 SW Alaska Street, Seattle, WA 98106.

Rowrbrazzle, published every January, April, July, and October, was founded in February 1984 by Marc Schirmeister of Los Angeles fandom. At the time furry fandom was not considered to be separate from s-f fandom or comics fandom yet. It was Rowrbrazzle's discussions of the new funny-animal social events, along with the amateur sketches and cartoons (mostly of funny-animal cheesecake art), that established that a new fandom was coming into existence.

Schirmeister continued to serve as ‘Brazzle’s Official Editor until 1989, when Fred Patten in Los Angeles took over. Patten was the Official Editor until his incapacitating stroke in March 2005. It was unexpected, and no clear successor had been set up. ‘Brazzle limped along with several volunteer O.E.s for a couple of years until Bill Haskell accepted the post permanently with #94 in July 2007. Now Haskell is passing it along to Edd Vick with #125 in April 2016.

Rowrbrazzle is technically an amateur press association (APA or apa) rather than a traditional magazine. It has a set number of members (currently 30, with a few openings) who each print their own pages and send them to the Official Editor. He staples them together into the quarterly magazine in January, April, July, and September, and sends a copy to each member. There are some other APAs that have produced extra copies for sale to the public, but ‘Brazzle produces only enough for its own membership. 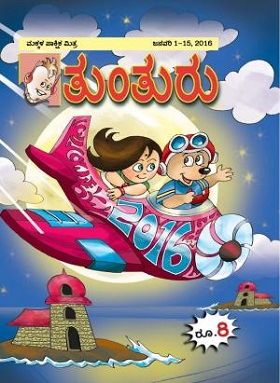 For the record, funny animals in Kannada (that’s Kannada the language, not Canada the country) can be found in Tunturu, a children’s magazine published since January 2000, originally bi-monthly but semi-monthly today.

Tunturu has been able to carve for itself an identity of being the most sought-after children’s magazine across the age-groups of 5-14 in Karnataka.

If you don’t know where Karnataka is, you can look it up. Reportedly an English-language edition is coming soon.

It’s ₹8 an issue, but you can subscribe to it in America for $5.99 for three months.

And that's probably more about funny animals in Kannada than you want to know. Racked, an online fashion magazine, has just published a particularly good illustrated article on fursuits; their history, the people who make them, and the furry fans who wear them.

It's the freakin’ weekend. A blessing of rainbow unicorns dance around you. Your heart bursts with joy at the sight of a dairy cow and an otter gingerly embracing. Sweat drips down your face. You remove your head and wipe the sparkling droplets away with the back of your cerulean paw. A rabbit wearing paisley suspenders invites you to hop with him in a circle. You radiate happiness inside and out. You are not dead. You are not on acid. You are at a furry convention.

Each year, dignified professionals from every major industry cast off their business casual, zip up their fursuits, and flock to furry events around the world. According to Furry Hall of Fame inductee and historian, Fred Patten, 74, the term "fursuit" was originally coined in 1993 by former Midwest Furfest chairman Robert C. King to describe full-body anthropomorphic animal costumes worn to conventions. William Haskell, current Official Editor of Rowrbrazzle, will be undergoing surgery in September, which means Steven F. Scharff will be the emergency editor for Rowrbrazzle #123, due this October. Haskell should return to his position as editor for issue #124, due in January 2015.

Rowrbrazzle was launched in 1983 by Marc Schirmeister, the original editor. In 1989, Fred Patten took over as editor, until 17 years later in 2005. After a series of interim editors, Haskell took over in 2007.

Rowrbrazzle has been called "a handy landmark to say that 'furry fandom existed at this time'." Members of Rowrbrazzle have included a veritable "who's who" of early furry fandom, including Stan Sakai, creator of Usagi Yojimbo, and three time Oscar nominee for Best Animated Feature Chris Sanders. The cost of printing and distribution combined with minimal or non-existent sales always made fanzines a marginal proposition. But the format, if not the medium, is still popular with those seeking to try their paws at publishing.

Tag by Felix Greypaw and Hashiko Whitepaw offers an example of what you can do in just a few days; the first – so far only – issue was published May 16, including in-depth (and, alas, uncredited) articles about Dust: An Elysian Tail, Furcadia, and Wolf's Rain from Wikipedia, as well as furry-themed horoscopes and art.

Furry N' Fuzzy Magazine has made it to two issues, although it's overdue for the third. Featuring artists, t-shirt reviews, interviews, personal histories, the syndicated column Ask Papabear, photos of things that look furry, and copious ads, there's something for everyone.