Just today we learned of a new urban-fantasy miniseries streaming later this month: “Netflix has shared an official trailer and key art for the upcoming four-part animation/live-action hybrid series Lost Ollie, inspired by the book Ollie’s Odyssey by prolific author, illustrator, and Oscar-winning filmmaker William Joyce (The Fantastic Flying Books of Mr. Morris Lessmore). All four parts of the limited series hit the streamer on August 24… The series is an epic adventure about a lost toy who braves the many dangers of childhood as he searches the countryside to reunite with the boy who lost him; and the story of the boy who lost more than a best friend… Shannon Tindle (Kubo and the Two Strings, Coraline) serves as creator, writer, and executive producer. The series was directed by Academy Award winner Peter Ramsey (Spider-Man: Into the Spider-Verse), who also serves as executive producer.” Animation World Network has more information and the official trailer. Interestingly, the last time Mr. Ramsey directed a William Joyce story, it was Rise of the Guardians. 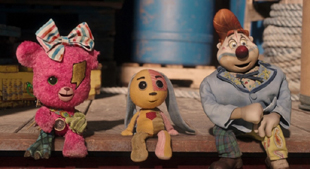