The Curse and The Pug

Here at In-Fur-Nation we’ve covered a lot of pirates, and a lot of werewolves, and a lot of little doggies.  Well, how about a little doggy who fights pirates who are werewolves? Welcome to the world of Mike Norton’s The Curse. In 2009 Mr. Norton, creator of Battlepug (which we’ve also covered here) took up the 24-Hour Comic Book Challenge, which yes, challenges comic book creators to bring about a 24-page comic book, from scratch, in 24 hours. The result was The Curse, in which a small but tenacious pet pug helps his master to defeat an evil band of pirates who’s bite turns you into one of their kind! The response to The Curse was so positive that Mr. Norton returned to it and created Parts 2 and 3 in 2010 and 2011 for the same challenge. Now Oni Press has collected all three sections into a single black and white trade paperback, which is available for pre-order and headed to the shelves this October. 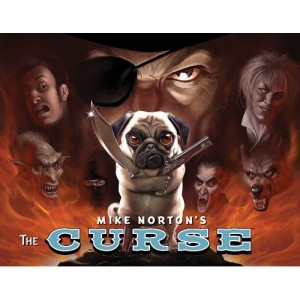