flayrah
furry food for thought
furry
conventions
fursuits
media
movies
eccentric
opinion
sci-fi
art
television
animals
comics
science
animation
websites
novels
Featured: 'Fuga: Melodies of Steel' - A game that tanks, but in a good way - Did you ever want to play a game with animal people in a World War 2…

Review: 'Even the Wingless', by M.C.A. Hogarth This book contains content considered unsuitable for young readers 17 and under, and which may be offensive to some readers of all ages. (publisher’s advisory)

This review has been updated to address some dead links. The book now starts the Prince's Game series.

Even the Wingless is a science-fiction novel in the same 25th-century interstellar United Alliance setting as the author’s anthropomorphic Pelted stories, such as Alysha’s Fall (Cornwuff Press, September 2000; review). This novel features anthropomorphic “dragons”.

The multi-planet Alliance consists of numerous races/species; humans, the various bioengineered Pelted animal-peoples, and the human-looking but telepathic, pallid Eldritch among them. Outside the Alliance are other interstellar nations, including the Chatcaavan Empire of shape-shifting, mammalian humanoid aliens. Even the Wingless is set in the dragons’ empire, and its protagonist is an Eldritch.

Lisinthir Nase Galare is an Eldrich esper substituting for a human, the latest Ambassador to be sent by the Earth-headquartered but Pelted-world-dominated Alliance to the Chatcaavan Empire.

‘Twelve ambassadors I’ve seen walk onto that shuttle since they decided to set up a permanent presence over there,’ [Admiral] Levy said over the music of the coffee service. ‘Twelve came back. One in a casket. Four straight into the care of shrinks. Every time they come back, I send a note to Fleet Central about what my observations of the Chatcaava suggest they’d respect.’

‘And still they send unsuitable candidates,’ Lisinthir said, accepting the coffee and with it the flutter of emotion the human passed him through their brief contact.

‘Ah, yes.’ The admiral sat again behind the desk. ‘I keep trying to tell FC that the Empire doesn’t recognize the same … courtesies? Rules? That we do. That they need someone tough and adaptable, and above all, someone unflappable.’

Levy’s brows lifted. ‘Ah! Ah! I see.’ He sucked from his cup, considering. ‘Figured. I should have figured. The Pelted are too cultured. They think all problems can be solved by talking. Some problems need a gun.’

‘You won’t leave it at that, will you?’ Levy said. ‘Because if you do, you’re going to be the next person they send packing in a couple of months … if you’re lucky. If you’re not, you’ll come back in a box.’

‘An accident,’ Lisinthir murmured. ‘Surely there will be no more caskets.’

‘Don’t kid yourself, Ambassador,’ Levy said. ‘They killed him because he bored them and to test whether we’d have the nerve to call them to task for it. We didn’t. No one’s safe, except if he has teeth he’s not afraid to use.’ (p. 4) The Chatcaavans are first seen through the Slave Queen, a pampered aristocrat but still a humiliated and mistreated dragon because she is only a female:

The Slave Queen turned her narrow face from the view, one hand clenched into a fist. Out of habit, she kept her mutilated wings out of view, swinging them behind her as she stood. Stepping down from the ledge beside the window, the Queen walked deeper into her soft prison. Vast pillows in gold and lavender edged with orange decorated the tower room, the topmost of the harem and her own, private space – such as any Slave Queen could have private space, of course. The other females left her alone here, but the males came and went as the Emperor allowed: lately only Second had been her guest, or on occasion vile Third. (p. 6)

You can guess the only reason the Emperor or his male subordinates ever visit the harem. Descriptions of the humanoid mammalian dragons are dropped sparingly into the story. They have horns, wings, beaks and pointed ears, they are dark-gray skinned with soft scales and manes, four-armed, with thin tails, a little over five feet tall with “vast, white-less” scarlet eyes.

Finally Third grinned, a gaping of his beak that showed off all the razor-fine teeth lining his maw. […] Particularly when they had talons to shame an eagle and more teeth than sharks. (p. 26) Females are required to refer to all males as , and to their personal male as . The Slave Queen is constantly attended by her personal handmaiden and only friend, the slave-girl Khaska, a Pelted:

‘Mistress!’ The voice came from downstairs, and a few seconds later a wisp of a Seersa fox female appeared. She was short even by Chatcaavan standards, the black tips of her ears barely reaching the Slave Queen's neck, and her body was a soft creamy white tipped with silver, with black legs and hands and tail-tip. Confectionery, really: it was no wonder she’d been stolen from some Alliance merchant crew. Her orange eyes were several shades darker than the Slave Queen’s, and matched the translucent scarf wrapped around her waist. It was her only clothing; the thick fur at her breast and hips barely obviated the need. The silver collar at her throat definitely obviated the need. Slaves did not wear clothing. (p. 6)

Nine of the twelve prior Alliance ambassadors have been Pelted; one Tam-illee, four Seersa, a Phoenix, an Asanii, and two Aera. All have been too delicate, too civilized to fit into the Chatcaavan Emperor’s sadistic court. But he is only slightly worse than the general Chatcaavan society. The dragons are all cruel and callous, encouraging the strong to trample the weak, and treating females as worthless except as breeders and objects to satisfy sexual lusts. 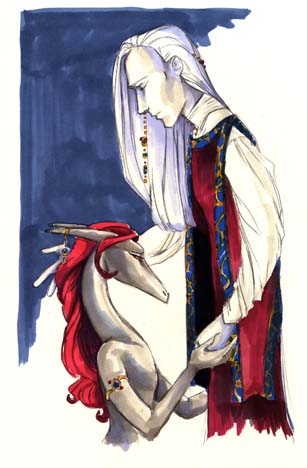 He [the last ambassador] had turned down all the Emperor’s invitations – to the harem, to the vicious entertainments, to planned cruelties and tests – and swiftly discovered, as had all those who’d filled his role before him, that leaving the Chatcaava unattended was a splendid way to become a non-entity. (p. 8)

Lisinthir’s mission is spelled out by the Eldritch Queen.

The Alliance, she said, needed a man who could read minds, one with enough passion to match the fire of shape-changing dragons, ostensibly to be an ambassador, but in truth to stop them from stealing more of the Alliance’s citizens for use as slaves and to gather intelligence on whether the Emperor planned war on the Alliance. All the previous ambassadors had not only failed in those aims, but also lost ground in every other form of negotiation, from trade concessions to debt forgiveness to the locations of the border. It was a job for an esper, and the Alliance had humbled itself to ask its weaker ally for help. (p. 14) Lisinthir begins his ambassadorial service by adopting the attitude known as “insult them until they apologize”, a dangerous game since taking a more conciliatory attitude will get him (and the Alliance) despised, while to truly insult the Emperor or his courtiers can get him sent home in disgrace or (more likely) killed.

‘I do not plead or cajole or hope, Second,’ Lisinthir said. ‘I require, demand and occasionally compromise. You will deal with me accordingly.’ (p. 55)

Lisinthir’s arrogance amuses the Chatcaavan Emperor, who “befriends” the Ambassador whom he can so easily have killed. The two engage in an amiable social relationship in which the dragon constantly tries to subtly insult or humiliate the Eldritch, who skilfully ripostes the traps. The dialogue of the two becomes a sophisticated verbal duel which can be deadly if Lisinthir makes the slightest mistake; especially since the Ambassador is determined to rescue the latest Alliance slaves whom the Chatcaavans have captured.

Meanwhile, the Slave Queen broods on the plight of females in the Empire. Lisinthir senses a potential ally – especially since Khaska, real name: Laniis, was an Alliance Fleet Intelligence agent before her capture – who can help him to rescue the slaves. But Lisinthir’s ultimate goal is not to rescue one batch of slaves, but to persuade the Chatcaavans (which means to persuade the Emperor) to renounce the practice of enslaving Alliance citizens. And the only way to accomplish this is to remain in the Chatcaavan court after helping the Pelted prisoners to escape, and openly challenge the Emperor. Even the Wingless is skillfully told, and is a satisfying s-f adventure. Yet I found myself wondering all through it why the Alliance did not take a more martial stance against the Empire from the beginning? It worked for the new U.S. confronting the Berber States at the beginning of the 19th century. Presumably the parallels are not the same. The U.S. could afford belligerence and to attack the arrogant but weak Beys of Algiers, Tunis, and Tripoli, while the Alliance seems to be under the control of Pelted pacifist politicians. Also, the story never clarifies the relative strengths of the Alliance and the Empire; possibly the Alliance is not in a position to challenge the Empire militarily. Finally, given the natures of the Alliance government and the Eldritch, Lisinthir’s victory is more satisfying accomplished by intellectual means and a formal duel; by coming on like Scaramouche rather than Rambo.

But it is said that to truly understand an enemy, it is necessary to become him. As Lisinthir, the Emperor, and the Slave Queen slowly maneuver around each other, they grow familiar with each other’s natures. Too familiar …?

I stayed up for hours reading through the preview last night. The characters are distinctive, although they're enhanced further by the artwork on the author's website. I've yet to find one I empathize with, though . . . at least, not one that lasted long. The Chatcaavan Empire is a harsh world filled with harsh people.

I understand this novel was once accepted by Tor, but left in limbo by the departure of an editor. It's their loss. Other than a couple of words that seemed like they had been placed there for their own sake when a simpler one would do, and the fact that the aforementioned art doesn't appear to accompany the story, it's hard to fault.

High praise, GreenReaper, thank you. And for adding the art to the review too... that was a pleasant surprise. :)